The Life and Teams of Johnny F. Bassett

One of the most influential sportsmen of the late 20th century, Johnny F. Bassett’s marketing wizardry belied his impact on professional hockey and football. A Canadian showman with a Barnumesque flair for spectacle, Bassett challenged the orthodoxy of sports, building sporting utopias in the fatally flawed World Football League, World Hockey Association, and United States Football League. He catered to the common fan, demanded fair treatment of athletes, and forced the sporting establishment to change the way it did business, often to his own detriment.

Drawing on archival research and interviews with Bassett’s contemporaries, this comprehensive biography chronicles his life in and around professional sports: his quixotic attempt to compete with the Maple Leafs; his stunning coup in signing three members of the reigning Super Bowl champions for his WFL team; his battles with the Canadian government over American football; his audacious marketing of hockey in Alabama; and his rivalry with Donald Trump for the soul of the USFL.

Denis M. Crawford holds a PhD in American Studies, teaches at Youngstown State University, and is managing editor for The Coffin Corner, the official magazine of the Professional Football Researchers Association. He is an honorary member of the Bucs UK, the largest American football fan club in the United Kingdom and a 2010 inductee to the Bucs UK Hall of Fame.

Acknowledgments viii
Preface 1
Introduction 3
One—Young Bassett and the Show Business of Sports 7
Two—Show Business Leads to Sports Business 15
Three—Battle for the Hockey Heart and Soul of Toronto 27
Four—No Defense, No Discipline, No More Toronto 36
Five—No, Canada: The WFL Northmen and Canadian ­Anti-Americanism 45
Six—Bassett Becomes a Political Football 57
Seven—The Best of a Bad League 76
Eight—Too Good for the WFL, Not Enough for the NFL 89
Nine—Selling Hockey in Alabama 103
Ten—Emancipation of the Canadian Juniors 119
Eleven—Tennis, the USFL and the Bandits 131
Twelve—­Bandit-Ball 152
Thirteen—The Model USFL Franchise 165
Fourteen—The Death of the USFL and Bassett 179
Fifteen—Conclusion 197
Chapter Notes 207
Bibliography 223
Index 231 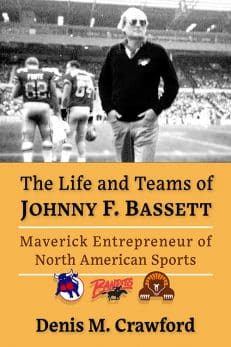 You're viewing: The Life and Teams of Johnny F. Bassett $29.95
Add to cart