Sweeping biographies abound, authorized and nonauthorized, regarding Ted Kennedy. They tend either to applaud him for his ideals or criticize him for his personal flaws. The present work differs. Using historical tools and legal analysis, it closely examines ten major pieces of legislation Kennedy sponsored or strongly backed as well as the attempt at immigration reform he spearheaded with John McCain. This is a balanced and thoroughly researched book. By tracing the legislation from their introduction through passage, and analyzing the actual language of the legislation, the book sheds considerable light both on the unintended consequences through time of the legislation as well as consequences Kennedy intended in attempting to promote reform and combat discrimination.

Craig A. Horowitz is an employment lawyer living in Santa Monica, California.

1. Entrance into the Senate and the National Immigration Act of 1965 9

4. The Watergate Scandal and the Campaign Finance Reform Act of 1974 68

5. From Carter to Reagan and the Comprehensive Anti-Apartheid Act of 1986 81

6. From the Bork Hearing to the Americans with Disabilities Act of 1990 95

10. The Lewinsky Scandal, Bush’s Controversial Election and the No Child Left Behind Act of 2001 158

11. From Bush, to Immigration Reform Attempts, to Obama and the Death of the Senator 172 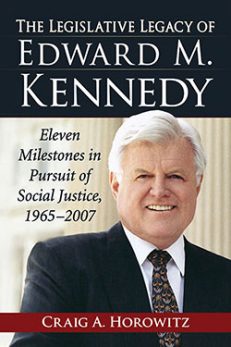 You're viewing: The Legislative Legacy of Edward M. Kennedy $29.95
Add to cart