The Late Years of Benedict Arnold

The life of Benedict Arnold, the American Revolutionary War general who attempted to surrender West Point to the British in 1780, didn’t end after he betrayed his American compatriots. In the newly formed United States, he was condemned as a conspirator and in Britain, he was suspected of the same. He quickly left America, spent a short time in London, and largely operated in Canada and the Caribbean as a smuggler, a mercenary and a pariah. Although much has been written about Arnold’s famous fall from grace, this book is the story of a charismatic man of vaulting ambition. With new research and photographs, it delves into his last twenty years. Arnold remains fascinating as a toppled hero and a flagrant traitor. Another American general wrote in the 1780s that Arnold “never does anything by halves”; indeed, he lived on a big scale. This study documents each of the various points of the globe where the restless Arnold operated and lived, pursuing wealth, status, and redemption.

Jane Merrill has published in 50 national magazines and has written books on fashion, lifestyle, and eighteenth century culture. She lives on the St. George Peninsula in Maine.

John Endicott has practiced law in New York and Connecticut. He lives in Litchfield, Connecticut. 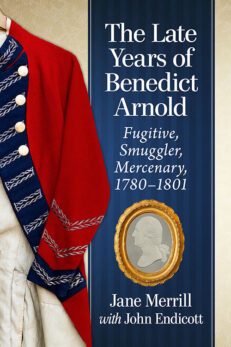 You're viewing: The Late Years of Benedict Arnold $39.95
Add to cart