The Last Confederate Ship at Sea

The Wayward Voyage of the CSS Shenandoah, October 1864–November 1865

The CSS Shenandoah fired the last shot of the Civil War and was the only Confederate warship to circumnavigate the globe. But what was Captain James Waddell’s true relationship with his Yankee prisoner Lillias Nichols and how did it determine the ship’s final destination? Without orders, Waddell undertook a dangerous three month voyage through waters infested with enemy cruisers. He risked mutiny by a horrified crew who, having been declared pirates, could be hanged. This is the true story behind the cruise of the Shenandoah—one of secret love and blackmail—brought to light for the first time in 150 years.

Paul Williams has worked in the television and film industries as a writer, producer and director. He lives in Melbourne, Australia.

“Williams has crafted an intriguing sea saga…a rewarding tale of the sea, of the war and of the heart”—The Northern Mariner/Le marin du nord; “Paul’s work is rich, full of detail, and engaging. His methodical research of the famed Confederate commerce raider will delight and inspire any enthusiast of Civil War naval history.”—Matthew T. Eng, Naval Historical Foundation. 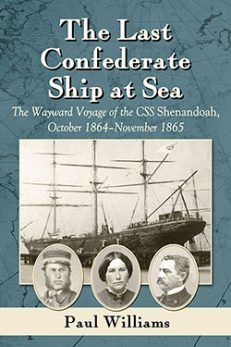 You're viewing: The Last Confederate Ship at Sea $29.95
Add to cart