The IRA on Film and Television

The Irish Republican Army (IRA) has for decades pursued the goal of unifying its homeland into a single sovereign nation, ending British rule in Northern Ireland. Over the years, the IRA has been dramatized in motion pictures directed by John Ford (The Informer), Carol Reed (Odd Man Out), David Lean (Ryan’s Daughter), Neil Jordan (Michael Collins), and many others. Such international film stars as Liam Neeson, James Cagney, Richard Gere, James Mason and Anthony Hopkins have portrayed IRA members alternately as heroic patriots, psychotic terrorists and tormented rebels.
This work analyzes celluloid depictions of the IRA from the 1916 Easter Rising to the peace process of the 1990s. Topics include America’s role in creating both the IRA and its cinematic image, the organization’s brief association with the Nazis, and critical reception of IRA films in Ireland, Britain and the United States.

Mark Connelly teaches literature and film at Milwaukee Area Technical College in Milwaukee, Wisconsin, where he is vice president of the Irish Cultural and Heritage Center.

“This interesting volume on political cinema examines depictions of the Irish Republican Army in film and television”—Reference & Research Book News. 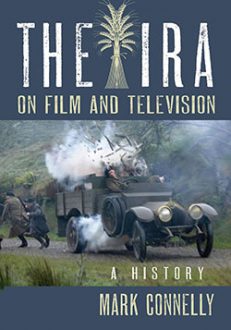 You're viewing: The IRA on Film and Television $55.00
Add to cart