History of a Premier Team in the Negro Leagues

The Indianapolis ABCs were formed around the turn of the century, playing company teams from around the city; they soon played other teams in Indiana, including some white teams. Their emergence coincided with the remarkable growth of black baseball, and by 1916 the ABCs won their first major championship.
When the Negro National League was formed in 1920, Indianapolis was one of its charter members. But player raids by the Eastern Colored League, formed in 1923, hurt the ABCs and by the Depression the team was fading into oblivion. The team was briefly resurrected as a Negro league team in the late 1930s, but was otherwise relegated to the semiprofessional ranks until its demise in the 1940s. Through contemporary newspaper accounts, extensive research and interviews with the few former ABC players still living, this is the story of the Indianapolis team and the rise of Negro League baseball. The work includes a roster of ABC players, with short biographies of the most prominent.

A long time resident of Indianapolis, Paul Debono is an amateur baseball historian and member of SABR. He currently lives in Cincinnati, Ohio. 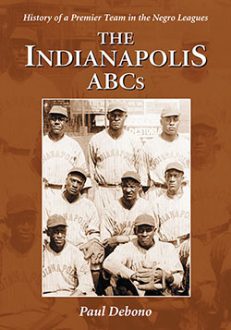 You're viewing: The Indianapolis ABCs $29.95
Add to cart