The Hospital on Seminary Ridge at the Battle of Gettysburg

“Old Dorm,” which served as the first classroom and dormitory of the Gettysburg Lutheran Theological Seminary, is a familiar tourist site—Union Cavalry General John Buford directed the opening stages of the battle of Gettysburg from the building’s distinctive cupola and some of the bloodiest fighting of the three-day conflict took place on Seminary Ridge. However, few visitors realize the building’s important role as the second largest hospital at Gettysburg, both during and after the battle. During the peak occupancy, 600–700 wounded soldiers from both armies were cared for at this site.
This work presents the history of the Gettysburg Seminary during the Civil War and the important cast of characters that have passed through its halls by utilizing the firsthand accounts of soldiers, civilians, surgeons, and relief agency personnel. Also included is the prewar and postwar history of the Seminary, as well as information about President Samuel S. Schmucker and the abolition movement.

Michael A. Dreese is the author of five books and numerous journal articles on topics including Pennsylvania and the American Civil War. An award-winning photographer, he is the president of the Friends and Descendants of the 151st Pennsylvania, and vice-president of the Susquehanna Civil War Round Table. He lives in Kreamer, Pennsylvania. 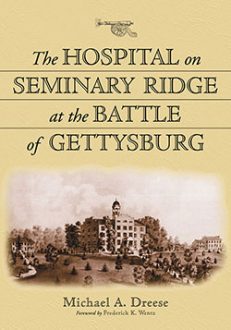 You're viewing: The Hospital on Seminary Ridge at the Battle of Gettysburg $29.95
Add to cart