Its maneuverability impresses pilots and laymen alike. Its design, which makes it capable of extreme controlled/short takeoff and landing (Ultra C/STOL), attracted the almost instant interest of the United States military. Developed through collaboration between Dr. Otto Koppen of MIT and Dr. Lynn Bollinger of Harvard, the Helio Courier was designed to be one of the safest, most versatile aircraft ever produced—and lived up to this claim in ways that even in some cases exceeded the designers’ expectations.

This book gives the reader a comprehensive developmental history of the Helio Courier, one of the most remarkable planes in the annals of aviation. It begins by discussing the progenitors of the Helio Courier and the drive behind developing an aircraft with such unprecedented safety and flight capabilities. Then, starting with the Helio’s inception in the late 1940s, this volume follows the aircraft through drawing board, prototype and post-production stages. It examines the role the plane played in military operations in Vietnam and various covert operations since. The final chapter looks at the possible future of the aircraft. Sources for this intensively researched history include interviews from former Helio company officials, independent archival data, news articles and FAA type design specifications. 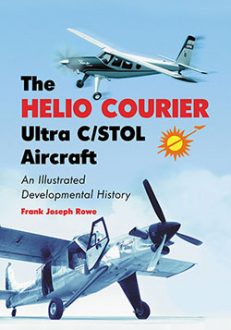