The Health of the Presidents

Surrounded by well-meaning aides, physicians sworn to confidentiality, and in some cases, sycophants, the president of the United States usually keeps the state of his health well-guarded from the American public. Though the intention of the 25th Amendment is to provide for the removal of an impaired president, the level of discretion involved in such a decision has caused many to question whether it serves the national interest. In large part, the men who have served as president have been past middle age and susceptible to the dame maladies as the rest of the aged population. The complete medical history of each of the first 41 U.S. presidents, emphasizing illnesses that affected them during their administrations, is here set out for the lay reader by a physician. The presidents’ health care regimens (diet, exercise, home remedies, etc.) and physicians’ treatments are also discussed.

The late John R. Bumgarner, M.D., was also the author of Sarah Childress Polk (1997) and Parade of the Dead (1995). He lived in Greensboro, North Carolina.

“the readable case studies are enlivened by the author’s medical opinions…recommended”—Library Journal. 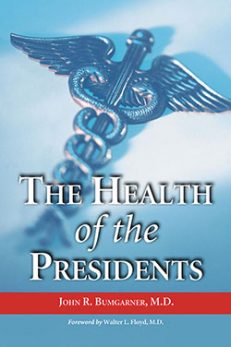 You're viewing: The Health of the Presidents $39.95
Add to cart