A Novel of Cyprus

﻿ Cyprus. 1979. One island, divided by the notorious Green Line. Greeks on one side, Turks on the other. To cross the Green Line means death and 342 men have found that out. John Reid, who grew up in Cyprus, is the first to cross the Green Line, and not once but several times. Certain Greek millionaires make him an offer he can’t refuse, and this leads him into the clutches of The Professor, the head of the Turkish Cypriot Secret Service. Reid’s desperate attempt at escape is threatened by Burt Zoffel, a CIA operative from his past, and by Zoffel’s beautiful daughter, playing her own game.
With the scent of the old Ottoman world wafting about, Reid moves fast over the sun-baked soil and through the Aleppo pines, along the golden beaches with kebabs and ouzo, up perilous mountain roads beneath ancient monasteries on craggy cliffs, and Crusader castles aloof above the world of killers and spies.

John Stewart is a Scotsman who grew up in Cyprus in the 1950s and 60s, and was there again in 1979, at the very same time as the Green Line Runner. He has spent the last thirty years in North Carolina, having immigrated from Australia. Before that he lived in London. He has written 11 scholarly/reference books, including African States and Rulers, an Antarctica encyclopedia and Broadway Musicals. 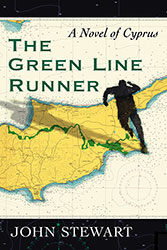