A Critical and Cultural History

The Greek film musical was the most popular film genre in Greece in the 1960s. The songs became instant hits, the dances were performed at parties, and the fashions were imitated by people of all ages. Challenging assumptions that the Greek film musical was a culturally lacking imitation of Hollywood, this work examines the genre as a cinematic and historical phenomenon that condensed key social and cultural concerns of its time, and contributed to the development of a national popular culture in the light of the rapid Americanization of postwar Greece. During two decades characterized by affluence and upward mobility in Greek society, the musical expressed and reinforced the optimism of the times while capturing the tensions and contradictions that emerged as a result of rapid social changes.
Beginning with an introduction to modern Greece and cultural identity, the book locates the genre in its historical context and argues that it consists of different layers of cultural appropriation and transformation that redefine traditionally fixed notions of identity. Old Greek cinema is examined, the Greek musical is defined, and a number of key films are analyzed with particular emphasis on the style and structure of the musical numbers. The work concludes with a filmography of Greek musicals; lists of the annual outputs of the production companies Finos Films, Karagiannis-Karatzopoulos, Klak Films, and Damaskinos Michailidis; a glossary; and bibliographies in English, Greek, and French.

Appendix A. Filmography of Greek Musicals: Credits and Plot Summaries      145 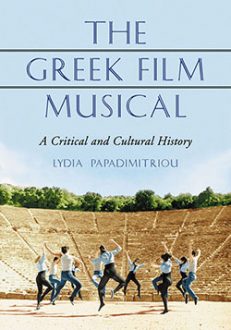 You're viewing: The Greek Film Musical $49.95
Add to cart