This is a critical overview of monster magazines from the 1950s through the 1970s. “Monster magazine” is a blanket term to describe both magazines that focus primarily on popular horror movies and magazines that contain stories featuring monsters, both of which are illustrated in comic book style and printed in black and white.
The book describes the rise and fall of these magazines, examining the contributions of Marvel Comics and several other well-known companies, as well as evaluating the effect of the Comics Code Authority on both present and future efforts in the field. It identifies several sub-genres, including monster movies, zombies, vampires, sword-and-sorcery, and pulp-style fiction. The work includes several indexes and technical credits. 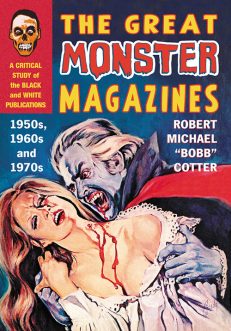 You're viewing: The Great Monster Magazines $29.95
Add to cart