Beloved among cult horror devotees for its signature excesses of sex and violence, Italian giallo cinema is marked by switchblades, mysterious killers, whisky bottles and poetically overinflated titles. A growing field of English-language giallo studies has focused on aspects of production, distribution and reception. This volume explores an overlooked yet prevalent element in some of the best known gialli–an obsession with art and artists in creative production, with a particular focus on painting. The author explores the appearance and significance of art objects across the masterworks of such filmmakers as Dario Argento, Lucio Fulci, Sergio Martino, Umberto Lenzi, Michele Soavi, Mario Bava and his son Lamberto.

Alexandra Heller-Nicholas is an award-winning Australian film critic, author and academic who has written eight books on cult, horror and exploitation cinema with an emphasis on gender politics. She is a research fellow at RMIT University and an adjunct professor at Deakin University, both in Melbourne, Australia.

• “Nicholas is one of the most perceptive critics working in cinema theory today [and] this volume proves without a doubt that she is a formidable voice who refuses to be silenced.”—Quarterly Review of Film and Video

• “A solid title on the giallo films, particularly for those with an interest in art, that inspires further research and collecting”—popcultureshelf.com

• “Gehring’s book helps strengthen what had been a weak link in the chain of understanding [of Chaplin’s] remarkable career.”— Shepherd Express 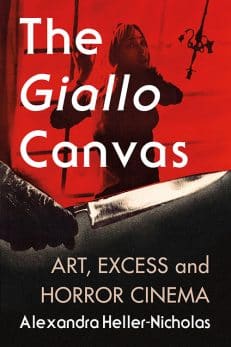