The Generation Starship in Science Fiction

This critical history explores the concept of the multi-generational interstellar space voyage in science fiction between 1934, the year of its appearance, into the 21st century. It defines and analyzes what became known as the “generation starship” idea and examines the science and technology behind it, also charting the ways in which generation starships manifest themselves in various SF scenarios. It then traces the history of the generation starship as a reflection of the political, historical, and cultural context of science fiction’s development.

Simone Caroti is the course director of Science Fiction and Fantasy for the Creative Writing BFA at Full Sail University. He is a senior research scientist for the Astrosociology Research Institute (ARI), a nonprofit organization devoted to bringing the arts, humanities and social sciences into the debate on the future of humanity in space.

“strongly recommended”—Midwest Book Review; “explores the multigenerational interstellar space voyage in science fiction from its first filmic appearance to the 21st century. The history of the generation starship is viewed as a reflection of the political, historical and cultural context of the genre’s development”—CBQ. 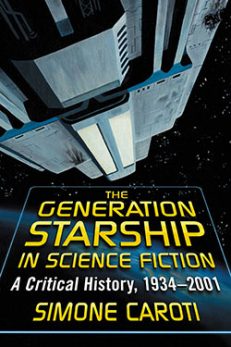 You're viewing: The Generation Starship in Science Fiction $29.95
Add to cart