The Freckleton catastrophe of August 23, 1944, occurred when an American B-24 Liberator crashed into the small village of Freckleton in northwest England. The plane was on a test flight when it encountered a rare and severe summer thunderstorm. Air traffic control at the American air base Warton recalled the bomber back to the base. When the pilot attempted to abort the landing because of poor visibility and high winds, a downdraft caught the plane and it crashed into the adjacent village of Freckleton. As the B-24 tumbled through the village, destroying three houses and a snack bar, flames erupted from wreckage and engulfed Holy Trinity grade school. Before the fire could be brought under control, the holocaust destroyed an entire generation of children in this village of fewer than 1,000 inhabitants. The village would never be the same.
In a compelling account of sorrow, loss, hope and finally rebirth, the book looks at the history of the village, the establishment of the base at Warton, the crash, the funeral of the 61 victims, the official British inquest and the American investigation into the cause of the crash. The lives of the survivors, the servicemen and the villagers are followed through 2012.

James R. Hedtke is a professor of history and political science at Cabrini College where he has taught for 40 years. He lives in Broomall, Pennsylvania. 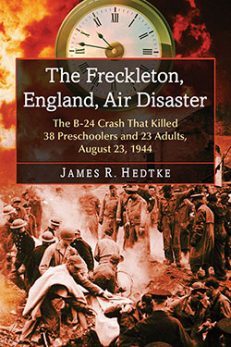 You're viewing: The Freckleton, England, Air Disaster $39.95
Add to cart