The Fourth Marine Brigade in World War I

Battalion Histories Based on Official Documents

During World War I, the American Expeditionary Force Second Division saw more action and captured more ground and enemy combatants than any other, including the vaunted First Division.
The 4th Marine Brigade, especially, earned a reputation as a steadfast unit of superb fighting men. Drawing on battle reports and other official documents, this volume follows those Marines through their service in France in 1917 and 1918, their postwar occupation of Germany, and their arrival in New York City in August 1919.
Chapters covering each of the brigade’s seven battalions recount their role in some of the most intense battles of the war, including Belleau Wood, Soissons, St. Mihiel, Blanc Mont and the Meuse River.
Descriptions of the Armistice, homecoming parades, and the brigade’s inactivation at Quantico complete this comprehensive chronicle of one of the American military’s most distinguished units.

The late George B. Clark, military historian and former Marine, wrote about World War I, World War II, and the United States Marine Corps. He lived in Pike, New Hampshire.

“clearly a labor of love, and it is one of the best options for understanding the daily experiences of World War I Marines”—H-Net Reviews. 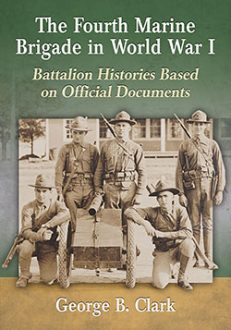 You're viewing: The Fourth Marine Brigade in World War I $39.95
Add to cart