The Forest City Lynching of 1900

Politics in Rutherford County were heated a century ago: the developing textile industry, the growing population, an agricultural crisis and race relations inflamed everyone. Mills Higgins Flack, a leader of the Farmers’ Alliance and the county’s first Populist in the state House, was allegedly murdered on August 28, 1900, by Avery Mills, an African American. This book documents the murder and the lynching of Avery Mills. The author (Flack’s great-great-grandson) considers the phenomena of racial lynching, the Populist movement in the county, the white supremacy movement of the state’s Democratic party and the county’s KKK activities.

J. Timothy Cole is a librarian at Greensboro Public Library and an archivist at Guilford College. He lives in Greensboro, North Carolina. 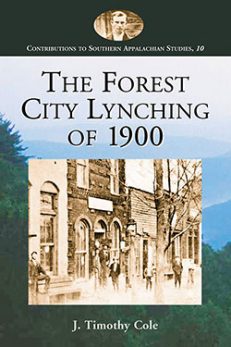