The Force of The Umbrella Academy

Essays on Voices and Violence in the Comics and Netflix Series

Even as the major superhero film franchises appear to be exhausting their runs The Umbrella Academy demonstrates that the superhero genre is still extremely effective at creating role models with lasting psychological resonance and allegories with extraordinary emotional impact. These essays give a voice to the misunderstood family members of The Umbrella Academy in the comic book series and its highly popular Netflix adaptation. They explore different forces like individualism, identity, family, and feminism. One of the most striking features that unites these concepts is the linkage between violence with voice, as well as violence’s aestheticized depiction.

Lisann Anders’ research interests include literary adaptations in film and popular culture from Shakespeare to Disney. She lives in Zurich, Switzerland.

Part 2: Forces of Otherness
Artifice and the Superheroes of the 21st Century: Post-Cinematic Reflections on Constructedness
Morgane A. Ghilardi 70
Extraordinary Bodies and the Language of Pain: Disability in Apocalypse Suite and Dallas
Dana Fore 88 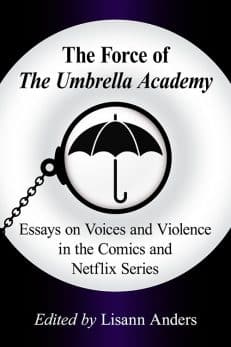 You're viewing: The Force of The Umbrella Academy $39.95
Add to cart