The First Marine Captured in Vietnam

A Biography of Donald G. Cook

Colonel Donald Gilbert Cook was the first U.S. Marine captured in Vietnam, the first and only Marine in history to earn the Medal of Honor while in captivity; and the first Marine POW to have a U.S. Navy ship named in his honor, the USS Donald Cook (DDG-75). On December 31, 1964, while serving as an observer with a South Vietnamese Marine Corps battalion on a combat operation against Viet Cong forces, he was captured near the village of Binh Gia in South Vietnam. Until his death in captivity in December 1967, Cook led ten POWs in a series of primitive jungle camps. This first book-length biography concentrates especially on Cook’s three years in captivity, and is the first book exclusively about a Marine POW held in South Vietnam. Throughout, Cook’s adherence to the Corps’ traditional leadership principles and knowledge of the Code of Conduct are highlighted. His biography provides a unique case study of exemplary leadership under extremely difficult conditions. Includes 68 photographs. 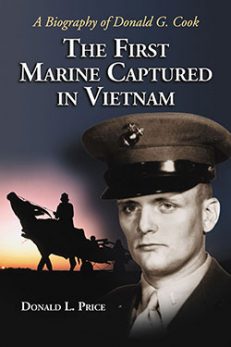 You're viewing: The First Marine Captured in Vietnam $25.00
Add to cart