Following the loss of the CSS Arkansas in early August 1862, Union and Confederate eyes turned to the Yazoo River, which formed the developing northern flank for the South’s fortress at Vicksburg, Mississippi. For much of the next year, Federal efforts to capture the citadel focused on possession of that stream. Huge battles and mighty expeditions were launched (Chickasaw Bayou, Yazoo Pass, Steele’s Bayou) from that direction, but the city, guarded by stout defenses, swamps, and motivated defenders, could not be turned. Finally, Union troops ran down the Mississippi and came up from the south and the river defenses and the bastion itself were taken from the east. From July 1863 to August 1864, sporadic Confederate resistance necessitated continued Federal attention. This book recounts the whole story. 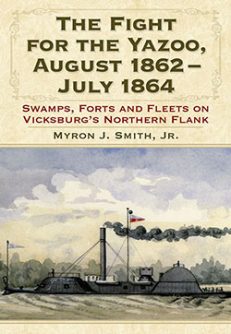