The Fiction of Rushdie, Barnes, Winterson and Carter

Breaking Cultural and Literary Boundaries in the Work of Four Postmodernists

Literature often reflects societal change, but it can also effect change by inspiring people to think in new ways. Four authors who encourage readers to question traditional boundaries are Salman Rushdie, Julian Barnes, Jeanette Winterson and Angela Carter. This book takes an in-depth look at the works of these authors with specific emphasis on how they challenge religion (especially in its fundamentalist forms) and its intersections with history, politics, gender and sexuality. The study notes both differences and similarities among the four authors, whose writings broadly represent the major themes in contemporary British literature. Divided into two primary sections, the volume first takes a look at Rushdie and Barnes and their stance regarding historical and political issues. The second section concentrates on gender and sexuality in the writings of Winterson and Carter. Among the works examined are Rushdie’s The Satanic Verses and Midnight’s Children; Barnes’ Flaubert’s Parrot and A History of the World in 10 ½ Chapters; Winterson’s Boating for Beginners and Written on the Body; and Carter’s The Passion of New Eve and Heroes and Villains. The final chapter includes a brief survey of other significant figures in postmodern British literature, including Martin Amis, Ian McEwan, D.M. Thomas, Fay Weldon and Emma Tennant.

Gregory J. Rubinson is a lecturer in the UCLA Writing Programs. He lives in Los Angeles, California. 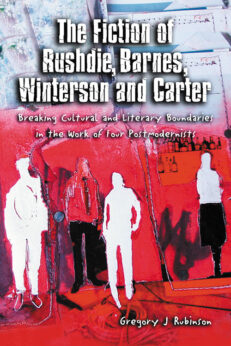 You're viewing: The Fiction of Rushdie, Barnes, Winterson and Carter $35.00
Add to cart