The Federal Bureau of Investigation, America’s most famous law enforcement agency, was established in 1908 and ever since has been the subject of countless books, articles, essays, congressional investigations, television programs and motion pictures—but even so it remains an enigma to many, deliberately shrouded in mystery on the basis of privacy or national security concerns.
This encyclopedia has entries on a broad range of topics related to the FBI, including biographical sketches of directors, agents, attorneys general, notorious fugitives, and people (well known and unknown) targeted by the FBI; events, cases and investigations such as ILLWIND, ABSCAM and Amerasia; FBI terminology and programs such as COINTELPRO and VICAP; organizations marked for disruption including the KGB and the Ku Klux Klan; and various general topics such as psychological profiling, fingerprinting and electronic surveillance. It begins with a brief overview of the FBI’s origins and history.

Michael Newton is an award-winning author of numerous books on topics ranging from cryptozoology to civil rights and organized crime. He lives in Indiana.

Appendix A: Abbreviations and Acronyms      387 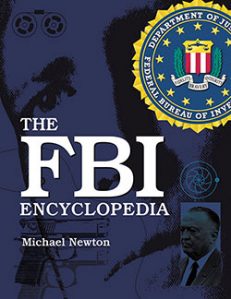 You're viewing: The FBI Encyclopedia $75.00
Add to cart