The Evolution of Organ Music in the 17th Century

A Study of European Styles

The 17th century was the century of the organ in much the same way the 19th century was the century of the piano. Almost without exception, the major composers of the century wrote for the instrument, and most of them were practicing organists themselves. This historical book surveys, analyzes, and discusses the major national styles of 17th century European organ music. Due to the extraordinarily extensive body of literature produced during this 100-year period, this text includes 350 musical examples to illustrate the various styles. The book also includes brief discussions of the various national styles of organ building, an appendix about the various notational methods used in the 17th century, and a chapter on Spain and Portugal written by Andre Lash, an expert on the subject.

John R. Shannon is professor emeritus of music at Sweet Briar College, and is author or editor of several books about organ composition, improvisation and music history. He is a charter member of the Southern Historical Keyboard Society and lives in Winston-Salem, North Carolina.

“Documents and examines the evolution of seventeenth century organ music and its genres and composers”—Reference & Research Book News. 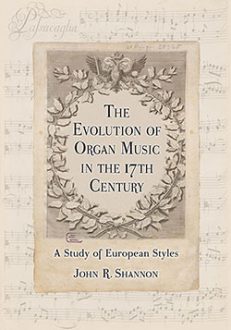 You're viewing: The Evolution of Organ Music in the 17th Century $55.00
Add to cart