From Sean Connery to Roy Rogers, from comedy to political satire, films that include espionage as a plot device run the gamut of actors and styles. More than just “spy movies,” espionage films have evolved over the history of cinema and American culture, from stereotypical foreign spy themes, to patriotic star features, to the Cold War plotlines of the sixties, and most recently to the sexy, slick films of the nineties.
This filmography comprehensively catalogs movies involving elements of espionage. Each entry includes release date, running time, alternate titles, cast and crew, a brief synopsis, and commentary. An introduction analyzes the development of these films and their reflection of the changing culture that spawned them.

Freelance writer Paul Mavis has contributed articles to such cinema publications as The Viewsletter and American Movie Classics Magazine. He has also served as the film historian for the Toledo Museum of Art. He lives in Maumee, Ohio. 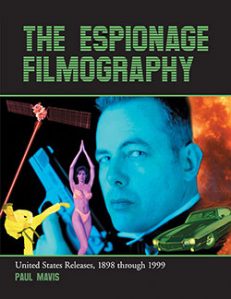 You're viewing: The Espionage Filmography $45.00
Add to cart