The Enola Gay and the Smithsonian Institution

On August 6, 1945, the B-29 Enola Gay dropped an atomic bomb on Hiroshima, Japan, which ushered on the end of World War II. For the 50th anniversary of this major event in world history, the National Air and Space Museum of the Smithsonian Institution produced an exhibit. A controversy erupted, however, over the exhibit’s historical authenticity. Veterans, for example, complained that the museum displayed a misrepresented version of history.
After concisely covering the background of the Enola Gay and its mission, this study focuses on the controversy surrounding the museum exhibit. Issues covered include casualty figures, ethical questions, and political correctness, among others. The viewpoints of such groups as museum personnel, exhibit organizers, veterans, and historians are covered. Appendices offer information on content analysis of the National Air and Space Museum exhibit script, non-museum materials that were intended to complement the exhibit script, and the importance of full disclosure in research. 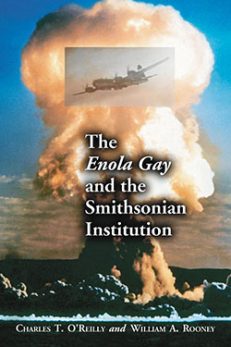 You're viewing: The Enola Gay and the Smithsonian Institution $45.00
Add to cart