The Egyptian Expeditionary Force in World War I

A History of the British-Led Campaigns in Egypt, Palestine and Syria

This military history follows the 5th Battalion of the Suffolk regiment from England to Syria and the end of World War I. Among the previously untapped primary source materials used are the author’s father’s correspondence and photographs from his 1913–1919 service with the 5th Suffolk in England, Gallipoli, Egypt, Palestine and Syria. It follows chronologically the frustrating failures, and the final victory, of the campaigns in North Africa and the Middle East and refutes the widely held misconception that cavalry played no major role in the conflict.

Michael J. Mortlock, a former archivist at the University of Richmond, contributes to film documentaries and writes fiction. He lives in Richmond, Virginia.

“photos are…significant and outstanding. My hat is off to Michael Mortlock…a labor of love”—ASTENE; “a clear and interesting account of an often neglected area of WWI operations”—ARmy Rumour SErvice. 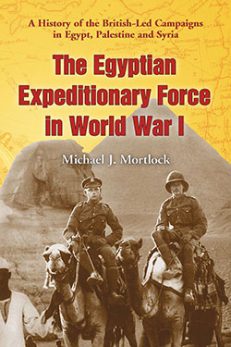 You're viewing: The Egyptian Expeditionary Force in World War I $35.00
Add to cart