Nature’s Veiled Purpose in the Plays

The dramas of Eugene O’Neill—often called America’s first “serious” playwright—exhibit an imagining of the natural world that enlivens the plays and marks the boundaries of the characters’ fates. O’Neill’s figures move within purposefully animated natural environments—ocean, dense forest, desert plains, the rocky soil of New England.
This new approach to O’Neill’s dramas explores these ecological settings as crucial to his characters’ ability to carry out their conscious and unconscious desires. O’Neill’s career is covered, from his youthful one-acts, to the middle years experimental dramas, to the mature tragedies of his late period. Special attention is paid to the connection of ecology and theological quest, and to O’Neill’s persistent evocation of an exotic, natural “other.” Combining an ecocritical approach with an examination of Classical and philosophical influences on the playwright’s creative process, the author reveals a new, less hermetic O’Neill.

Robert Baker-White is a professor of theater at Williams College in Massachusetts, where he teaches dramatic literature, drama theory and performance.

One—Introduction: “A seagull or a fish…” 5

Oikos, Logos and Situating the Human 14

Theatre and the Natural World 18

Ecocritical Contexts: Pastoral and Beyond 30

Organizing the Corpus: Tropes of Seeing Nature in ­O’Neill 35

Toward Accommodation: Surviving with the Davil in “Anna Christie” 54

Beyond the Horizon: Scenic Rhythms in “a land of lost grace” 71

“God’s in the stones”: Naturalist Nature in Desire Under the Elms 80

The Hairy Ape: Spiritual Quest and Failure to Transcend 99

Five—Trade Winds in the Coco Palms: The Lure of the Exotic 130

The Doubleness of Nature in The Emperor Jones 137

Strangers in Strange Lands: The Fountain and Marco Millions 147

A Moon for the Misbegotten 193

“Baker-White’s reading goes a long way toward correcting a rather extreme critical view of ‘nature’ or ‘natural settings’ as missing from O’Neill’s works. Recommended”—Choice. 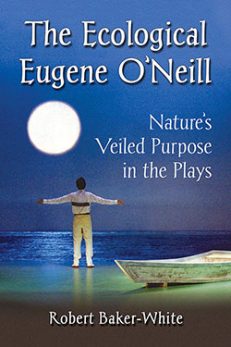 You're viewing: The Ecological Eugene O’Neill $39.95
Add to cart