The Culture of Sports in the Harlem Renaissance

During the African American cultural resurgence of the 1920s and 1930s, professional athletes shared the spotlight with artists and intellectuals. Negro League baseball teams played in New York City’s major-league stadiums and basketball clubs shared the bill with jazz bands at late night casinos. Yet sports rarely appear in the literature on the Harlem Renaissance.
Although the black intelligentsia largely dismissed the popularity of sports, the press celebrated athletics as a means to participate in the debates of the day. A few prominent writers, such as Claude McKay and James Weldon Johnson, used sports in distinctive ways to communicate their vision of the Renaissance. Meanwhile, the writers of the Harlem press promoted sports with community consciousness, insightful analysis and a playful love of language, and argued for their importance in the fight for racial equality.

Daniel Anderson is an assistant professor of English and the director of American Studies at Dominican University in River Forest, Illinois.

Through the Prism of Sports 3

Part I: Literature and the Renaissance Intelligentsia

1. The “Discipline of Work and Play”: Athletics, Education and the Harlem Intelligentsia’s Concept of Culture 21

4. The “Lost Arts”: Baseball and Boxing in the Historiography of James Weldon Johnson 80

5. “Jazz Journalism”: Sportswriting and Popular Culture in the Black Press 101

6. “A Course in the Curriculum of the Institution”: Sports and Politics in the Harlem Press 118

8. The Dean’s Demise: The Sudden Fall and Long Disappearance of Romeo Dougherty 164

Epilogue: Arna Bontemps, Sterling Brown and the End of an Era 179

• “Captivatingly examines why the 1920s and early–1930s Harlem literati were not avid sports fans or students of sports…recommended”—Choice
• “Anderson’s book provides an essential primer on early twentieth-century African American intellectual and literary life as seen through the lens of sport. …coherent, insightful and well-written…Anderson offers a nascent portrait of the African American athlete’s relationship with the press and culture, bringing to contemporary consideration a movement that would quite readily fit within today’s sports pages”—Nine
• “[A]n important book that connects the fields of English, African American Studies, and intellectual history with sport history. It shows how black sportswriters facilitated intellectual conversations that considered the value, role, and place of sport in African American life and made the Harlem Renaissance accessible to more people, shaping the outlook of black Americans for generations to come.”—Andrew McGregor, Sport in American History
• “Despite the many library shelves filled with books about the Harlem Renaissance and its leaders and participants, sports and what was written about sports is largely absent. This book offers a more complete understanding of African American history and, therefore, of American history by looking at how sports were and were not written about.”—Brian Carroll, author of The Black Press and Black Baseball, 1915–1955 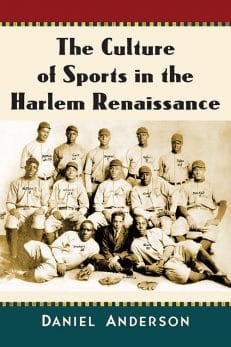 You're viewing: The Culture of Sports in the Harlem Renaissance $29.95
Add to cart