He was the final addition to Universal’s “royal family” of movie monsters: the Creature from the Black Lagoon. With his scaly armor, razor claws and a face only a mother octopus could love, this Amazon denizen was perhaps the most fearsome beast in the history of Hollywood’s Studio of Horrors. But he also possessed a sympathetic quality which elevated him fathoms above the many aquatic monsters who swam in his wake. Everything you ever wanted to know about the Gill Man and his mid–1950s film career (Creature from the Black Lagoon, Revenge of the Creature, The Creature Walks Among Us) is collected in this book, packed to the gills with hour-by-hour production histories, cast bios, analyses, explorations of the music, script-to-screen comparisons, in-depth interviews and an ocean of fin-tastic photos.

David Schecter has been a writer for more than three decades, and also produces soundtrack recordings for his Monstrous Movie Music CD label, which operates out of Chatsworth, California. He lives in Chatsworth.

Steve Kronenberg is the managing editor of Noir City, the e-magazine published quarterly by the Film Noir Foundation. He lives in Millville, New Jersey. 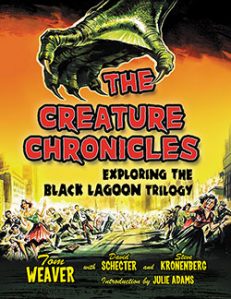 You're viewing: The Creature Chronicles $39.95
Add to cart