The Cooperstown Symposium on Baseball and American Culture, 2003–2004

This is an anthology of 17 papers, eight presented at the Fifteenth Cooperstown Symposium on Baseball and American Culture in June 2003 and nine presented at the Sixteenth in June 2004. Selected from over 60 papers delivered at both symposia, the essays represent the finest scholarship from two conferences.
The essays are divided into five sections. “Gender: Feminism and Masculinity on and off the Diamond” examines the relationship between baseball and gender, and includes a discussion of the rituals of brawling and a unique autobiographical account from former major league player Dan Ardell. “African Americans and the Game” studies Reconstruction-era baseball, the African American press’s attitude toward the Negro Leagues, and the declining appeal of baseball for the African American community. “Other Minorities: Beyond Baseball’s Melting Pot” expands on the discussion of baseball and ethnicity. “Baseball Media: Literature, Journalism, and Audiovisual Reproduction” examines baseball from the perspective of the media and popular arts and considers baseball’s cultural stereotypes in film, drama, and literature. “The Business of Baseball” offers five essays on topics ranging from the foundation of the Yankees dynasty to the impact of market size on competition in the modern major leagues.

William M. Simons is professor of history at the State University of New York–Oneonta.
Alvin L. Hall is director of Continuing Education and Summer Sessions at East Stroudsburg University in Pennsylvania.

PART I: GENDER: FEMINISM AND MASCULINITY ON AND OFF THE DIAMOND
A Cup of Coffee in the Show: My Seven Games in the Majors      17
Cuba Libre Versus Women’s Lib: A Comparison of the Feminine Side of Baseball in Cuba and in the United States      27
Defending Masculinity: Brawling and the Unwritten Rules of Major League Baseball      38

PART II: AFRICAN AMERICANS AND THE GAME
Bases Loaded: Race, Reconstruction, and Baseball in Washington, DC (1865–1876)      51
“Between Memory and History”: Black Sportswriters and the (Re)construction of Negro League Baseball      68
Down in the Dugout: Why Baseball Is No Longer the National Pastime for Blacks      80

PART III: OTHER MINORITIES: BEYOND BASEBALL’S MELTING POT
Who Is a Jewish Baseball Player?      95
Constructing the Cuban Pipeline: Papa Joe Cambria Brings the Cubans to Williamsport, Pennsylvania, (1944–1945)      107
The Chinese Wall and Murakami, Too: The Baseball Establishment and Post-World War II Perceptions of the Asian Other      123

PART V: THE BUSINESS OF BASEBALL
Yankees Profits and Promise: The Purchase of Babe Ruth and the Building of Yankee Stadium      197
Evolution of the Sunday Doubleheader and Its Role in Elevating the Popularity of Baseball      215
The Kansas City Royals’ Baseball Academy: Expanding the Science and Pedagogy of Baseball      227
The Cost of Competitiveness in Major League Baseball      242
The Elements of Major League Contraction      256 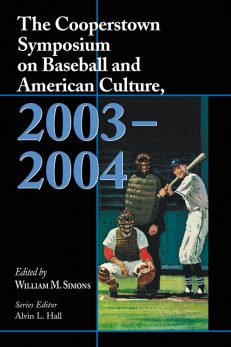