In 1947, the University of California and Yale University baseball teams took the field in Kalamazoo, Michigan, to play the first-1ever NCAA Division I College World Series. It was a two-day, three-game series with an attendance of fewer than 4,000. Today, it is a weeklong series held in Omaha, Nebraska, with eight teams, tens of thousands of fans and millions more watching on television.
This book covers each College World Series from 1947 through the 2003 series. For Division I, the authors devote a chapter to each decade, and then richly cover each game of each series. They also provide information on standout players’ careers (in baseball and other professions). The NCAA Division II and III team championships are also covered comprehensively if briefly, and an appendix features short profiles of great college coaches.

W.C. Madden, former editor and journalism instructor, is a member of the White County Historical Society and Tippecanoe Historical Association, and the author of 44 books. He lives in Monticello, Indiana.
SABR member Patrick J. Stewart, is a mechanical designer living in Flat Rock, Indiana.

Finalist, Casey Award—Spitball
“recommended”—Frommer Sports Net; “talented writers…very knowledgeable on baseball at all levels…highly recommend this book to all baseball fans, all sports fans and to everyone for this very complete and interesting history of baseball not only for the historical value but for all the great inside stories”—Bill McCaffrey, Inside Sports (Maryland Public Television). 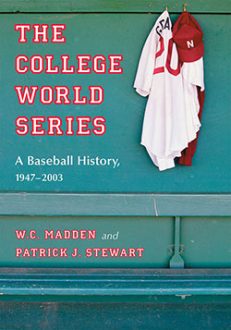 You're viewing: The College World Series $39.95
Add to cart