The collapse of the Western Roman Empire in the late 5th century A.D. marked the disintegration of order and security in Europe. It would be twelve centuries of trial and error before a successor political system—the nation-state—emerged to fill the void. The Eastern Roman Empire survived for a thousand years after the Western Empire’s fall, shielding the West from the encroachment of militant Islam. During the same millennium, the Catholic Church unsuccessfully tried to resurrect a universal empire in the West. During the period of the Renaissance, Reformation and Thirty Years’ War, the nation-state arose as Rome’s successor. This is the story of those 1,200 years, an era that transformed the Western outlook from one bound to faith amidst chaos to one armed with reason and a belief in progress.

Section I: City of the World’s Desire: Byzantium 3

“an outstanding recommendation and accomplishment”—Midwest Book Review; “an impressive history book covering a large amount of time that is made very accessible and readable for any fan or person interested in the period”—San Francisco Book Review; “The Collapse and Recovery of Europe, AD 476–1648 may sound like a weighty, imposing read, but its ability to pair facts with descriptions that are involving and engrossing set it apart from many other accounts and make it an outstanding recommendation and accomplishment, indeed.”—Diane Donovan, Editor, California Bookwatch. 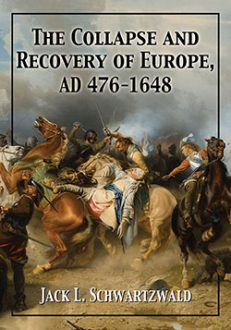