In 2016 the Rams left St. Louis for Los Angeles—having departed L.A. for St. Louis in 1995—and caused much heartbreak among fans. NFL teams are notorious for decamping to more profitable markets and the Rams’ history of opportunistic moves goes back to 1946, when they left Cleveland, their original hometown, where fans had cheered them to a championship a month earlier.
The move to L.A. from Cleveland shocked the NFL and shook up its power structure. It also jolted the all-white league into reintegration, prepared the way for the Browns, and made the Rams the only NFL champs ever to have spent the following season in a different city.
This is the story of how the Rams went from a home-grown Ohio team funded by local businessmen to the first major-league franchise on the West Coast, and how their departure jumpstarted a chain of events in Cleveland that continues to this day.

James C. Sulecki is the corporate content director of a northeastern Ohio business media company. He lives in Mentor, Ohio.

Winner—The Nelson Ross Award, Professional Football Researchers Association.
“Sulecki has written a readable account of the Cleveland Rams that flow nicely, and is often hard to put down. It is an interesting story, and is filled with fascinating details…a well researched and well written account of the Rams years in Cleveland and beyond”—Sport in American History; “the first book to examine the history of the Cleveland Rams and the context surrounding the team’s move to Los Angeles. The research is thorough…recommended”—Mind’s Eye Press. 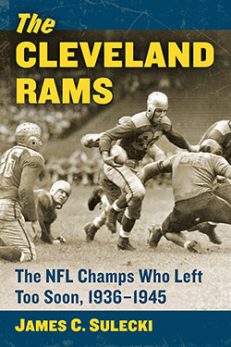