The Cinema of Generation X

A Critical Study of Films and Directors

When Steven Soderbergh exploded onto movie screens with sex, lies, and videotape in 1989, it represented more than the arrival of an important new director—it heralded the arrival of an entire generation of important new directors. Quentin Tarantino (Pulp Fiction), Kevin Smith (Dogma), David Fincher (Fight Club), M. Night Shyamalan (The Sixth Sense), Ben Stiller (Reality Bites), Michael Bay (Pearl Harbor), and dozens of others are all members of Generation X, the much talked about but much misunderstood successors to baby boomers.
This book is a critical study of the films directed by Gen Xers and how those directors have been influenced by their generational identity. While Generation X as a whole sometimes seems to lack direction, its filmmakers have devoted their careers to making powerful statements about contemporary society and their generation’s role in it.
Each section of the book deals with an aspect of Gen X filmmaking, including the influence of popular culture, postmodern narrative devices, “slackerdom” and the lack of direction, disenfranchisement and nihilism, the ever-evolving role of technology, gender issues and sexuality, the question of race, the influence of older filmmakers, and visions of the future.

Peter Hanson is a director of films including Every Pixel Tells A Story (2002) and Stagehand (2006). He lives in Los Angeles, California.

“readable…extensive apparatus…a fine introduction…will suit readers at all levels”—Choice; “engaging book about Gen X cinema…immensely readable and comprehensive”—Film & History; “examines the work of the innovative movie makers”—The Intelligencer Record; “offer(s) a thoughtful look at Soderbergh and his peers…a reminder that there are talented and creative filmmakers working today”—Midday Magazine. 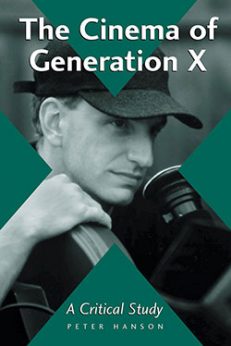 You're viewing: The Cinema of Generation X $29.95
Add to cart