The Cavalry of the Army of the Cumberland

During its two-year history, the cavalry of the Army of the Cumberland fought the Confederates in some of the most important actions of the Civil War, including Stones River, Chickamauga, the Tullahoma Campaign, the pursuit of Joseph Wheeler in October 1863 and the East Tennessee Campaign. They battled with legendary Confederate cavalry units commanded by Nathan Bedford Forrest, John Hunt Morgan, Wheeler and others. By October 1864, the cavalry grew from eight regiments to four divisions—composed of units from Pennsylvania, Michigan, Wisconsin, Ohio, Indiana, Iowa, Kentucky and Tennessee—before participating in Sherman’s Atlanta Campaign, where the Union cavalry suffered 30 percent casualties. This history of the Army of the Cumberland’s cavalry units analyzes their success and failures and re-evaluates their alleged poor service during the Atlanta Campaign.

“an informed and informative history…is very highly recommended for community and academic library American Civil War collections”—Midwest Book Review; “a well-written and interesting monograph on a little-known subject”—Civil War Times; “shines needed light on an overlooked group. The book is a deeply researched, finely focused, and richly detailed leadership, organization, and operations study of a formation that emerged from humble origins in November 1862…both a freshly original narrative history and a beneficial reference tool”—Civil War Books and Authors; “undoubtedly will be considered the standard on this subject”—Civil War News. 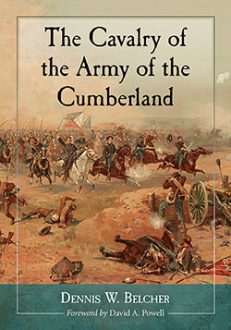 You're viewing: The Cavalry of the Army of the Cumberland $39.95
Add to cart