Three First Ladies, a Spy, a President’s Mother and Other Women of a 19th Century Georgia Family

The Bulloch women of Roswell, Georgia, were not typical antebellum Southern belles. Most were well educated world travelers skilled at navigating social circles far outside the insular aristocracy of the rural South. Their lives were filled with intrigue, espionage, scandal, adversity and perseverance. During the Civil War they eluded Union spies on land and blockaders at sea and afterwards they influenced the national debate on equal rights for women. The impact of their Southern ideals increased exponentially when they integrated into the Roosevelt family of New York.
Drawing on primary sources, this book provides new insight into the private lives of the women closely linked with the Bulloch family. They include four first ladies, a Confederate spy, the mother of President Teddy Roosevelt and a number of his closest confidants. Nancy Jackson, the family’s nursemaid slave, is among the less well known but equally fascinating Bulloch women.

2. The Bullochs of Roswell and Navy Blue 45

6. New Women Out of the Nineteenth Century 178

Appendix: The Bulloch Women and Men 197 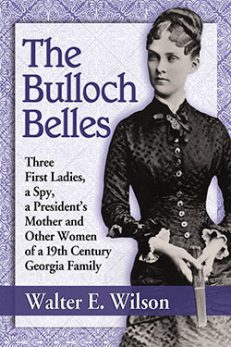