The Boston Marine Barracks is one of the oldest in the United States: it stands within eyeshot of the USS Constitution. Lt. Col. John R. Yates, Jr., the last commanding officer of the Barracks when it closed in 1974, researched the hundreds of letters left behind by previous Barracks commanders, their superiors and many others. They reveal the life and times of the Marines billeted at the Barracks from the early 19th century until World War II. Often, of course, the Marines were deployed to far-off events and places.
This book also tells the story of the Barracks Marines’ participation in the Seminole Wars, the action in Samoa, the Boer Wars, the Philippine Insurrection, Panama, the Boxer Rebellion, the Mexican War, the Civil War, the Spanish American War and World War I. This book reveals a naval prison’s existence on the shipyard for which the Marines were responsible for many years.

Lt. Col. John R. Yates, Jr., USMC (Ret.), was the last commander of the Boston Marine Barracks and served in the Vietnam War.
Thomas Yates has taught history, mathematics, and special education in the Massachusetts Merrimac Valley for six years. He flew for the Air Force, as an Instructor Navigator in the KC–135A airborne refueler and is a Desert Storm Veteran. He lives in Lowell Mssachusetts.

“Yates approaches his subject as a labour of love, but he has also produced a work of merit, and built a strong case for honouring a group of men who served their country well over the course of two centuries…a commendable work”—The Northern Mariner/Le marin du nord. 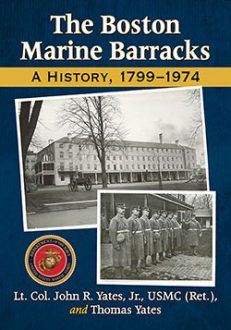 You're viewing: The Boston Marine Barracks $39.95
Add to cart