Robbery, Murder and Retribution in the Arizona Territory, 1883–1884

In December 1883, five outlaws attempted to rob the A.A. Castaneda Mercantile establishment in the fledgling mining town of Bisbee in the Arizona Territory. The robbery was a disaster: four citizens shot dead, one a pregnant woman. The failed heist was national news, with the subsequent manhunt, trial and execution of the alleged perpetrators followed by newspapers from New York to San Francisco.

The Bisbee Massacre was as momentous as the infamous blood feud between the Earp brothers and the cowboys two years earlier, and led to the only recorded lynching in the town of Tombstone—John Heath, a sporting man, who was thought to be the mastermind. New research indicates he may have been innocent. This comprehensive history takes a fresh look at the event that marked the end of the Wild West period in the Arizona Territory.

David Grassé is the author of several journal and newspaper articles about the Old West. He lives in Payson, Arizona.

• “The author writes clearly and has done momentous research. Readers who cannot get enough of the Wild West will appreciate his full accounting.”—The Journal of Arizona History

• “Reading the court proceedings as reported in surviving transcripts and the press makes the reader shake his head in amazement.”—Western Writers of America 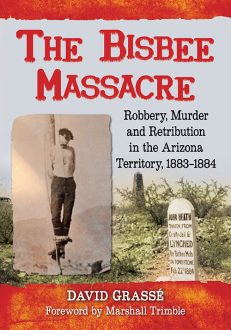 You're viewing: The Bisbee Massacre $29.95
Add to cart