The Birth of the Banjo

Joel Walker Sweeney was, in essence, the Elvis Presley of the 1840s. A professional banjo player, Sweeney introduced mainstream America to a music (and musical instrument) which had its roots in the transplanted black culture of the southern slave. Sweeney, an Irish-American born midway between Richmond and Lynchburg, Virginia, sampled African American music at a young age. He then added more traditional southern sounds to the music he heard, in essence creating a new musical form. The only avenue available to a professional banjo player was that of traveling minstrelsy shows and it was this route which Sweeney used to bring his music to the attention of the public. Beginning with the banjo’s introduction to America and Great Britain, the book examines early banjo music and covers the evolution of American minstrelsy (i.e., black face) and the opportunities it provided for artists such as Sweeney. Correcting previous fallacies and misconceptions (such as Sweeney’s supposed development of the five-string banjo), the work discusses Sweeney’s roots, his music and his contribution to the physical development of the instrument. An appendix contains a performance chronology. The work is also indexed.

Musician and writer Bob Carlin is the author of String Bands in the North Carolina Piedmont (2004). His articles have been published in Journal of Country Music and Bluegrass Unlimited. He lives in Lexington, North Carolina. 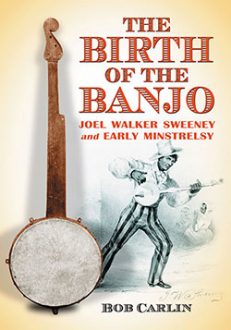