The Battle of Bataan

Fought with obsolete and discarded equipment by an army mostly made up of untrained Filipinos, the Battle of Bataan has become one of the “forgotten” battles of World War II.
This book provides a complete history of the conflict by looking at the events which led up to the battle, with an overview of the American, Philippine and Japanese forces that fought on Bataan. Abandoned by their commander, Douglas MacArthur, and written off by their president, without an air force or navy to support them, for 90 days the Americans and Filipinos held out against not only the Japanese but the ravages of starvation and disease. In the end came the largest surrender in American military history. The book contains dozens of period and modern photographs and several maps.

Donald J. Young is a military historian, author and lecturer on the pre–Midway period of World War II in the Pacific. He is a retired educator living in Vista, California. 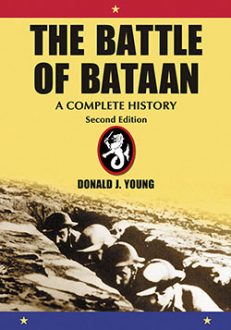