The Art and Inventions of Max Fleischer

The history of animated cartoons has for decades been dominated by the accomplishments of Walt Disney, giving the impression that he invented the medium. In reality, it was the work of several pioneers. Max Fleischer—inventor of the Rotoscope technique of tracing animation frame by frame over live-action footage—was one of the most prominent. By the 1930s, Fleischer and Disney were the leading producers of animated films but took opposite approaches. Where Disney reflected a Midwestern sentimentality, Fleischer presented a sophisticated urban attitude with elements of German Expressionism and organic progression. In contrast to Disney’s naturalistic animation, Fleischer’s violated physical laws, supporting his maxim: “If it can be done in real life, it isn’t animation.” As a result, Fleischer’s cartoons were rough rather than refined, commercial rather than consciously artistic—yet attained a distinctive artistry through Fleischer’s innovations. This book covers his life and work and the history of the studio that bore his name, with previously unpublished artwork and photographs.

A 40–year film and animation professional, Ray Pointer studied film and television production at Wayne State University and University of Southern California. He served as a film producer for the U.S. Navy Office of Information and worked in the animation industry for Film Roman, Hanna-Barbera, Fred Wolf Films, MGM and Nickelodeon. He lives in Pontiac, Michigan. 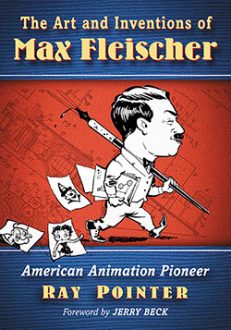 You're viewing: The Art and Inventions of Max Fleischer $39.95
Add to cart