The Andrews Sisters, the legendary singing trio of the 1930s, 1940s, and 1950s are the most successful female singing group in history and were the world’s top selling group until the Beatles arrived. Of the 605 songs they recorded, 113 charted. They also made 18 movies, appeared regularly on radio and television, and entertained three generations of GIs.
Based on extensive research, unpublished letters, and interviews with family, friends, and colleagues, this book documents not only the lives and work of the Andrews Sisters but also the popular culture spanned by their long careers. The book contains a complete discography of their released, unreleased, and solo recordings, including recording dates, record numbers, and accompaniment. Also included are a filmography and documentation of their radio and television appearances.

Cultural anthropologist H. Arlo Nimmo has published eight books and dozens of articles. He is professor emeritus of anthropology at California State University East Bay and lives in San Francisco.

Finalist, ARSC Award for Excellence
“the most substantial record yet…awesome amount of research…definitive…skillfully sifts through tons of contradictory information to get to the true facts…amazing…the USO section is outstanding (including the rare photos)…tremendously significant and perceptive…essential…terrific photos”—Classic Images; “the definitive record of the Andrews Sisters’ personal and professional lives”—Choice; “wonderful photographs…the author really did his homework in researching and writing this book. For those interested in the definitive reference on the Andrews Sisters, to fans interested in learning about their fascinating careers, this is the book…wonderful nuggets of information”—Catholic Library World; “excellent…great information”—Penguin Comics. 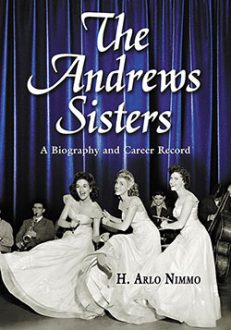 You're viewing: The Andrews Sisters $39.95
Add to cart