The American Steam Locomotive in the Twentieth Century

In stock (can be backordered)

Between 1900 and 1950, Americans built the most powerful steam locomotives of all time—enormous engines that powered a colossal industry. They were deceptively simple machines, yet, the more their technology was studied, the more obscure it became. Despite immense and sustained engineering efforts, steam locomotives remained grossly inefficient in their use of increasingly costly fuel and labor. In the end, they baffled their masters and, as soon as diesel-electric technology provided an alternative, steam locomotives disappeared from American railroads. Drawing on the work of eminent engineers and railroad managers of the day, this lavishly illustrated history chronicles the challenges, triumphs and failures of American steam locomotive development and operation.

• “Generously illustrated… Meticulously documented, this work of both love and precision is an essential addition to transportation libraries…highly recommended”—Choice

• “Stunningly comprehensive…those engaged in exploring the intermingled evolution of the various modes of transportation, their societal and economic impact on one another, and on the broader society, can gain much from what’s written in this book.…Making Morrison’s writings all the more worthwhile are the detailed and careful annotations throughout the entire book, leaving a clear trail to origins and sources of all information…If you’ve even a modicum of interest in steam locomotives and their concomitant history, do not deny yourself a copy of this book.”—SAH Journal

• “This book captures not only the changes in American steam locomotive development, but also the why that it happened. And that makes it worth reading”—The Santa Fe Railway Historical and Modeling Society

• “Do not deny yourself a copy of this marvelous book”—SpeedReaders 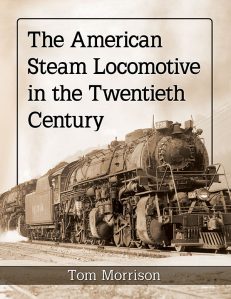 You're viewing: The American Steam Locomotive in the Twentieth Century $49.95
Add to cart