The American Novel of War

A Critical Analysis and Classification System

In song, verse, narrative, and dramatic form, war literature has existed for nearly all of recorded history. Accounts of war continue to occupy American bestseller lists and the stacks of American libraries. This innovative work establishes the American novel of war as its own sub-genre within American war literature, creating standards by which such works can be classified and critically and popularly analyzed. Each chapter identifies a defining characteristic, analyzes existing criticism, and explores the characteristic in American war novels of record. Topics include violence, war rhetoric, the death of noncombatants, and terrain as an enemy.

Wallis R. Sanborn, III, teaches at Our Lady of the Lake University in San Antonio, Texas. He has taught at Texas Tech University, the University of Texas of the Permian Basin, Oregon State University, and Angelo State University. His work has appeared in They Rode On: Blood Meridian and the Tragedy of the American West, Gale’s Contemporary Literary Criticism, Harold Bloom’s Modern Critical Views, The Cormac McCarthy Journal, Southwestern American Literature, Texas Books in Review, Iron Horse Literary Review, Harbinger, Elysium, and The Caprock Sun. He lives in San Antonio, Texas. 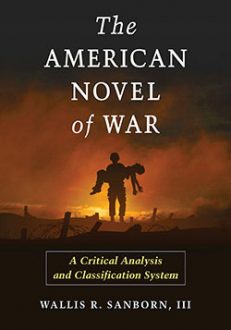 You're viewing: The American Novel of War $45.00
Add to cart