Though few realize it, the Netherlands East Indies were the object of Japan’s attack on Pearl Harbor in December 1941. Likewise, their invasions of Guam, Wake Island and the Philippines were mainly diversionary operations to safeguard their main assault on Dutch and British colonies. Since the end of World War I, Japan had coveted the vast East Indies oil reserves, and the colony had feared invasion since Germany overran Holland in May 1940. Isolated politically the weakly defended archipelago was a tempting prize. The East Indies government initially maintained a strict policy of neutrality while desperately working to build up its military strength. As Japanese actions pushed the region toward war, the Dutch reluctantly embraced closer ties with America and Britain. For a brief period, the East Indies were key players in Pacific War strategy. This book details for the first time in English the Dutch prewar strategy, their efforts to counter Japanese espionage and their sizable though largely forgotten military contribution in the early months of the Pacific War.

Tom Womack is a marketing consultant who lives in Dallas, Texas.

“Well-written…details many aspects of the East Indies campaign never before written about in English…wonderful detailed-laden charts and photos…an exceptional and comprehensive book…an important contribution to English language literature on the Dutch East Indies in the 20th century…essential…highly recommended”—Combined Fleet. 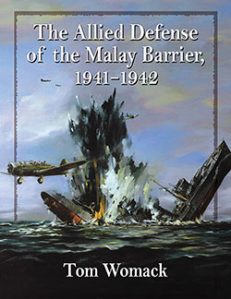