The Ages of the Black Panther

Essays on the King of Wakanda in Comic Books

Black Panther was the first black superhero in mainstream comic books, and his most iconic adventures are analyzed here. This collection of new essays explores Black Panther’s place in the Marvel universe, focusing on the comic books. With topics ranging from the impact apartheid and the Black Panther Party had on the comic to theories of gender and animist imagery, these essays analyze individual storylines and situate them within the socio-cultural framework of the time periods in which they were created, drawing connections that deepen understanding of both popular culture and the movements of society. Supporting characters such as Everett K. Ross and T’Challa’s sister Shuri are also considered. From his creation in 1966 by Jack Kirby and Stan Lee up through the character’s recent adventures by Ta-Nehisi Coates and Brian Stelfreeze, more than fifty years of the Black Panther’s history are addressed. Instructors considering this book for use in a course may request an examination copy here. 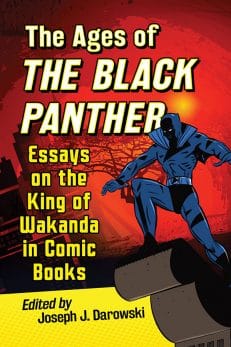 You're viewing: The Ages of the Black Panther $29.95
Add to cart