Over the years there has been much controversy and confusion about the true nature of The Actors Studio, a secluded workshop in New York City that for decades has had a marked influence on the stage and screen and yet functions like a secret society behind closed doors.
It all began when Stanislavsky’s Moscow Art Theater brought its brand of “realism” to the United States in 1923. The legendary Group Theater of the 1930s followed. Then came the creation of a studio workshop incorporating the provocative acting and directing techniques of Elia Kazan, and the emergence of Lee Strasberg as Studio head following Kazan’s departure. Strasberg’s background and the encounters between him and the actors he guided are presented in detail. The lives and careers of early icons like Marlon Brando, Montgomery Clift, Marilyn Monroe and James Dean are examined. Also covered are a progressive trans–Atlantic view of the subject, the Studio’s short-lived efforts to form a world-class production company in the 1960s, and a later set of transitions leading to an altered image of the Studio and a change of venue for the 21st century.
Such luminaries as these (and many more) have been associated with the Actors Studio: Edward Albee, Lauren Bacall, Glenn Close, Robert DeNiro, Robert Duvall, Danny Glover, Julie Harris, Dustin Hoffman, Dennis Hopper, Jack Lemmon, Shirley MacLaine, Steve McQueen, Paul Newman, Mike Nichols, Al Pacino, Julia Roberts, Eva Marie Saint, Neil Simon, Steven Spielberg, Sylvester Stallone, Rod Steiger, Meryl Streep, Eli Wallach, and Tennessee Williams.

Shelly Frome is a professor of dramatic arts emeritus at the University of Connecticut, a former professional actor and a prolific writer of fiction and nonfiction. He lives in Litchfield, Connecticut.

“rewarding”—International Magazine of Theatre, Film & Media; “extensive research…extraordinary…long overdue…an absolutely classic book”—The Advance; “One can hardly imagine a more informed and empathetic history/biography/evaluation of twentieth century theater and film performers and performances…written incisively and with great affection (even when critical), the book offers an important value added, because the author, a serious actor earlier in his career, addresses his topics as an artist as well as an historian”—Saul Bennett, poet and Pulitzer nominee, The Country and Abroad. 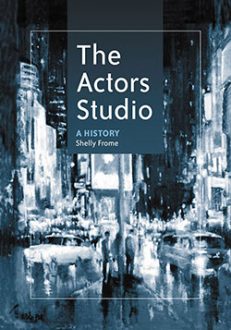