The years between America’s founding and the cusp of the Civil War are often overlooked in discussions of America’s struggle over slavery. The conflagration that nearly destroyed the country did not ignite quickly, but was the culmination of a long-smoldering debate that saw significant developments in those intervening decades. In particular, the period from 1829 to 1838 witnessed the growth of the Abolitionist movement, begun by determined visionaries bent on bringing the evils of slavery to the forefront of America’s consciousness and ending a glaring injustice. Attacked by their opponents, scorned by both sides for their missionary zeal, often relegated to a footnote in history, the Abolitionists were key in shaping the argument over slavery and bringing America’s greatest internal struggle to its conclusion.
This examination of the Abolitionist movement presents a year-by-year outline of the period from 1829 to 1838, chronicling the growth of the Abolitionists as a social and political group. By giving an overview of other important occurrences each year, it depicts the movement in a broader context, cementing relationships between seemingly disparate elements of American history and giving the movement its full due in the struggle to end slavery.

Kevin C. Julius is a mathematics teacher and a frequent presenter to the Erie Civil War Roundtable. He lives in Wesleyville, Pennsylvania.

Appendix 1: Influence of Slaveholding States on the Federal Government      241 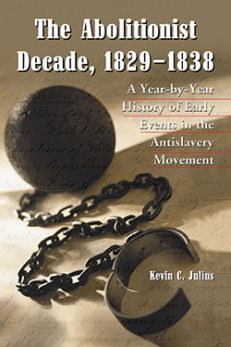