The 6th Michigan Volunteer Infantry in the Civil War

A History and Roster

The 6th Michigan Volunteer Infantry first deployed to Baltimore, where the soldiers’ exemplary demeanor charmed a mainly secessionist population. Their subsequent service along the Mississippi River was a perfect storm of epidemic disease, logistical failures, guerrilla warfare, profiteering, martinet West Pointers and scheming field officers, along with the doldrums of camp life punctuated by bloody battles. The Michiganders responded with alcoholism, insubordination and depredations. Yet they saved the Union right at Baton Rouge and executed suicidal charges at Port Hudson. This first modern history of the controversial regiment concludes with a statistical analysis, a roster and a brief summary of its service following conversion to heavy artillery.

Eric R. Faust has written three books about the exploits of Michigan troops during the Civil War. He lives in Palo Alto, California.

“An excellent job of presenting a balanced, fair, and objective account of both the heroic service and numerous depredations characteristic of the 6th Michigan….well written, historically accurate, and treats the good and bad in a balanced fashion…highly recommended”—Civil War News 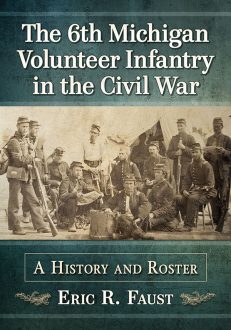 You're viewing: The 6th Michigan Volunteer Infantry in the Civil War $49.95
Add to cart