Here is the story of the 2005 Washington Nationals. Told from a fan’s perspective, the narrative begins inside RFK on opening day, expressing the simple pleasures of baseball that 34 years couldn’t erase. As the team took one series after another, baseball fans quickly forgot that many on the roster had ever played to empty seats in Montreal. Descriptive prose covers each game, from the crack of Brad Wilkerson’s bat to Livan Hernandez’s eight-inning outings.

Ted Leavengood is managing editor and a regular contributor of seamheads.com. He is the co-host of “Outta the Parkway,” which broadcasts weekly on Blogtalk Radio as part of the Seamheads Podcast Network and is the author of two other books on Washington baseball history.

“While baseball games generally last nine innings, the memories they elicit endure for a lifetime. Baseball fans mark time by where they were when significant events occurred—a no-hitter achieved or broken up in the ninth inning, a game-winning home run, a monumental or historical achievement or simply a few hours shared with friends, disputing a manager’s wisdom—or lack thereof—and downing beer and peanuts. Ted Leavengood’s The 2005 Washington Nationals, chronicling the first season of the Washington Nationals and baseball’s return to the nation’s capital, shares this fan-centric view of America’s pastime, taking readers into the swaying seats of RFK Stadium as they witness the unfolding of a long-awaited love affair. Leavengood offers a thorough evaluation of the Nationals’ debut season, relying on a well-honed, fan-in-the-stands perspective. Before players played, managers managed, or sportswriters worked a deadline, we were all baseball fans, dreaming of ninth-inning heroics. Leavengood captures that passion for the game in its simplest form—one that all too often is forgotten.”—Pete Kerzel, free-lance reporter for The Associated Press 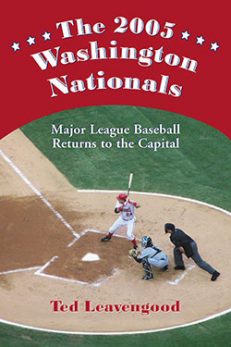